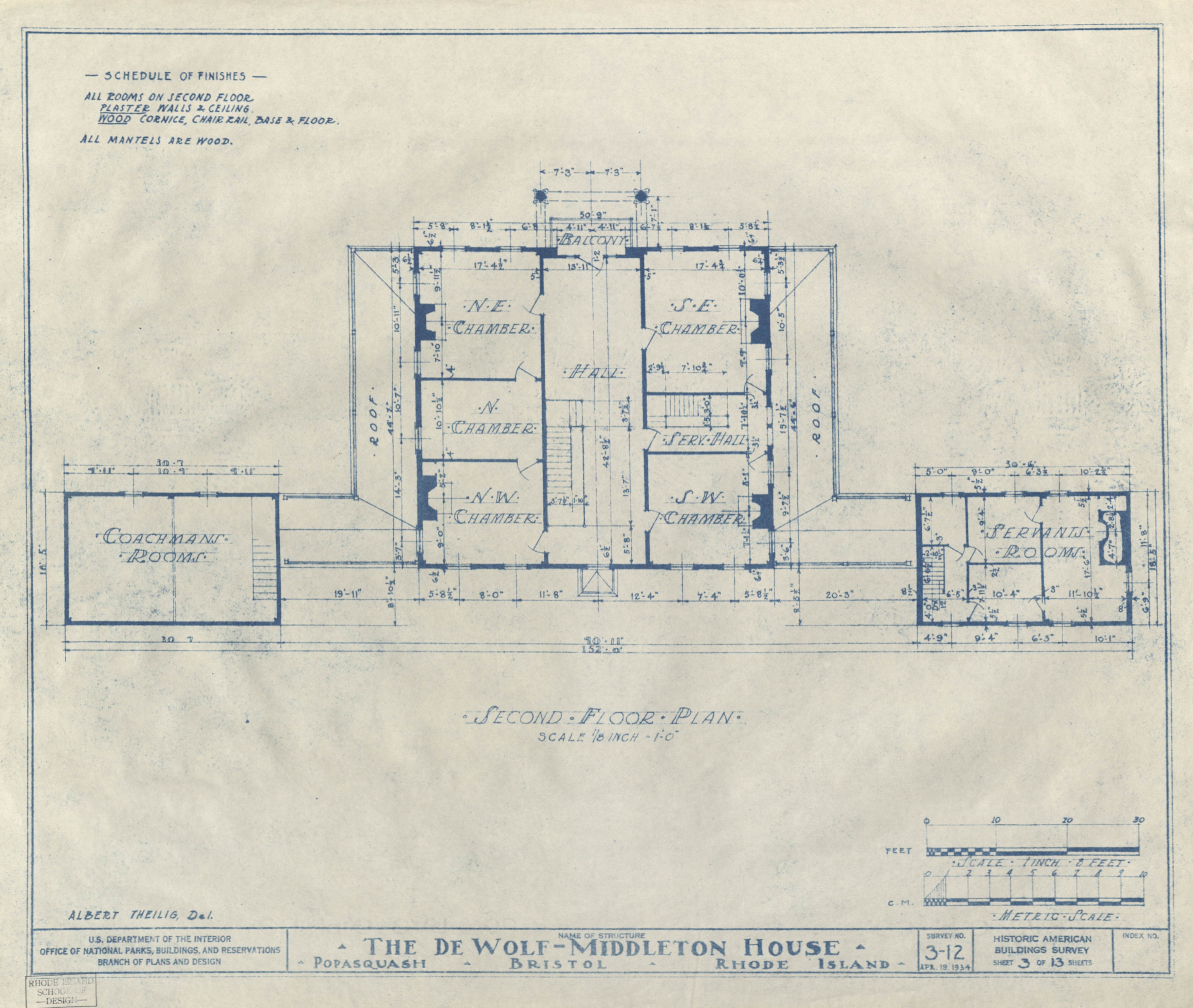 Wednesday, October 20 at Noon
by the 2nd Floor Exhibit Case

My inquiry began through an architectural sketch found in the Historical American Building Survey of 1933 volume 1. The DeWolf-Middleton House, or Hey Bonnie Hall, was built in Bristol, Rhode Island in 1808 by architect Russell Warren (1783-1860) for William DeWolf (1762-1829) and his wife Charlotte Finney (1764-1829). On the second floor, the south wing is marked as the servants' rooms. Five interconnected rooms sit above the separated kitchen of the home. Two servant stairwells flow from the rooms down into the kitchen and into the main chambers of the first and second floor. Scale and grandeur is emphasized in these drawings. Notes populate the thirteen drawings describing the space filled with mahogany wood floors, mantels, and banisters. Plaster walls on both floors, and laid brick in the basement. Warren's antebellum greek-revival style signaled not only a cultural association with wealth, but also an association to the architectural presence of slavery.

In fact the Rhode Island branch of the DeWolf family were the wealthiest generational slave traders in the state. Their actions as merchants, privateers, and political agents influenced and delayed Rhode Island’s gradual emancipation.  Upon opening this line inquiry my research method has been to work through the presence of three homes, all designed by Russell Warren for DeWolf families. These homes have come to be known as: the aforementioned Hey Bonnie Hall, James DeWolf’s The Mount a 28-room mansion also built in 1808, and George DeWolf’s Linden Place a 45-room mansion built in 1809, which stands as a preserved site in Bristol today. The materials collected here present pieces of a forming story around the DeWolf legacy (and catastrophe) that have found their way into the RISD Archives & Special Collections.

Biographically the three generations of DeWolf presented here follow suit: Mark Anthony DeWolf I (1726-1793) the principal paritarch of the Bristol branch, raised with Abigail Potter (1725-1809) thirteen children. Himself a slave trader, he passed this business on to his descendants. All eight of his sons entered the business of slavery. James DeWolf (1764-1837), the twelfth sibling, remains the most notable for his political efforts to disrupt emancipation and laws regarding slave trading. In 1791 James DeWolf was indicted for the murder of a captured woman aboard his ship Polly. He escaped to the Gold Coast and then to the Caribbean islands of Saint Thomas and Saint Eustatius, until 1795 where the case (presented without an audience or jury) was ruled in his favor. His singular empire included a rum distillery in West Africa and three sugar plantations in Cuba. As a family the DeWolf’s owned the Bank of Bristol, and formed the Mount Hope insurance company which insured more than 50 slave ships. George DeWolf (1778-1844, grandson of Mark Anthony, son of Charles DeWolf and Mary Taylor) continued trading illegally until 1820. It is speculated that between 1769 and 1808, the DeWolf generations transported 11,000 captured peoples into the United States.

Their homes, built by Warren in two subsequent years, were the pinnacle of wealth in the early 19th century. The interior life of their personal enslaved servants is spoken to be as horrific and strange as life at sea. Some materials here contain a few examples - Cynthia Mestead Johnson’s rebuilding of James DeWolf’s trading career details the actions of the murder aboard the Polly as well as his actions of “gifting” enslaved peoples to members of the family on holidays. Alicia Hopton Middleton’s (descendant of the later DeWolf/Middleton generation) Life in Carolina and New England during the Nineteenth Century provides perspective of the movement of enslaved care takers between Bristol and Charleston. Where the DeWolfs owned property and also a slave auction house. A photograph of Charlotte DeWolf and her enslaved caretaker “Lydia” is displayed.  Likewise, Early Homes of Rhode Island, and several other architectural surveys, detail the competition between DeWolf brothers to build bigger and grander properties. As well as their political and societal downfall in the 1820s and 30s.

In line with cultural historian Sadiya Hartman, the collecting and presenting of items tertiary to an autobiographical record are not shown to, “give voice to the slave, but rather to imagine what cannot be verified, a realm of experience which is situated between two zones of death - social and corporeal death - and to reckon with the precarious lives which are visible only in the moment of their disappearance.” (Hartman, Venus In Two Acts, 2008) The final group of materials presented are photographs made at Linden Place. While the interior decoration of the space has been reformed as the home shifted into the ownership of the Barrymore’s in the 20th century, the ability to walk into the same rooms where this family and their captives lived provides an understanding of the level of wealth acquired directly from the currency of human life.