In 1893, Daniel Berkley Updike (1860-1941) announced that he had opened a printing business at 6 Beacon Street in Boston, Massachusetts called Merrymount Press (1893-1949).  The Press published “...holiday books, privately printed books, ecclesiastical printing, decorations for books, “practical” book covers and minor decorative printing.” The Press’s type and decorations contain many styles, antique and new and from a variety of sources: English, French, Italian Renaissance, early German including “rude decorations of the New England printer; (and) the modern English style set by Morris”.

Merrymount Press derived its name and adopted the Maypole symbol from the area of Merrymount, Massachusetts, now a neighborhood in Quincy.  Thomas Morton was an English settler in an area the Native Americans called Passonagessit. The colonists translated this into Merrymount. Morton held several May Day celebrations complete with a Maypole for colonists and Native Americans in the 1600s.

Merrymount Press was instrumental in the Arts and Crafts movement in the field of American book arts. Updike was known as a “scholarly printer” and a “practical master printer”  who successfully combined the printing trade with the history of the book to produce a high standard of art. 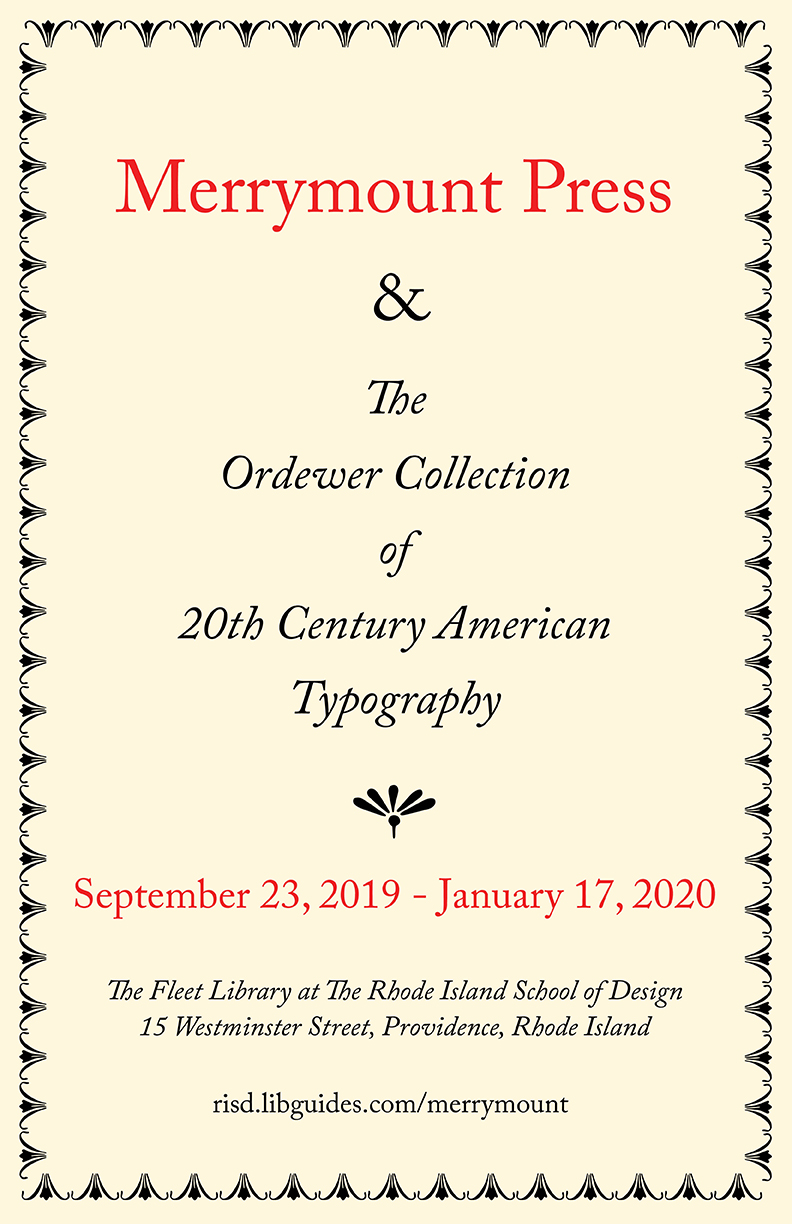 Some moves were to house a large printer such as a cylinder printer and then a mechanically fed printer.  Updike maintained the office, library, and presses together in the same building at each location. He felt keeping them near him was important so his vision would not be lost in translation between the humans and the machinery.  The staffing grew and changed over time The head foreman, John Bianchi, became Updike’s business partner in 1915.

The press evolved from handmade paper to smooth sheets, from hand typesetting to machine typesetting.  The style of the press moved from ornamental borders and William Morris-esqe to an uncomplicated and sparse design that became known as the “Updike style”.  The majority of Merrymount fonts used were Bell, Scotch, Oxford, Caslon, and Janson.

Updike was born in Providence, RI. He was unable to go to college as he left school at the age of 17 due to his father’s death. In 1878 Updike began working at the Providence Athenaeum as the assistant, filling in for the sick Librarian.  When the Librarian died, he continued to help out until a new Librarian was hired. In 1880 he started as an errand boy at Houghton, Mifflin & Company. Updike worked several jobs there and ended up being an advertising manager before moving to Riverside Press.

"To the Trade" and bookplates printed by Merrymount Press

Summer Street photos of the composing-room, press-room, and Updike in the library.

In 1892 when Updike was at Riverside Press in Cambridge, he was approached to reprint the 1892 Episcopal Church Prayer Book with decorative borders.  Bertram Grosvenor Goodhue (1869-1924) a type designer and architect designed the endsheets, cover and borders. The edition was a success. This accomplishment,  along with the commission of the Altar Book by Harold Brown of Rhode Island, led Updike to invest in type and borders and go out on his own. “Perhaps the reason that I survived, in spite of mistakes, was that a simple ideas had got hold of me-- to make work better for its purpose than was commonly thought worthwhile, and by having one’s own establishment to be free to do so.”

The Altar Book (1896) was the first important book of Merrymount Press.  The book shows the strong influence of William Morris. The type, called Merrymount, as well as the borders and initials were designed by Bertram Grosvenor Goodhue.  Robert Anning Bell (1862-1933), artist and designer, did the drawings. The book was printed at DeVinne Press in New York. There were many difficulties including problems procuring handmade paper, thus the book took nearly three years to finish.

Around this time Updike made a trip to London.  Here he found inspiration in visiting Kelmscott House, seeing exhibits of Kelmscott Books as well as early books and manuscripts.  He also made contact with the Caslon House during his visit.

The author Edith Wharton (1862-1932) was a great friend of Merrymount Press.  Wharton demanded Scribners, her publisher, have Merrymount print her books. Updike used Scotch-face type.  At the time, this type had not been used for fiction in America. Merrymount printed the following titles by Wharton:

During World War I, Edith Wharton edited The Book of Homeless.  The sale of this book raised funds for civilians displaced by the war.  The book contains poetry and illustrations. Updike found it to be difficult as to how best connect all the original paintings and drawings.  In the end he relied on photogravure, color halftone and had blocks for the title page and decorations done by Rudolph Ruzicka (1883-1978), an illustrator from Czechoslovakia.

Between 1910 and 1920 Updike taught  “An Introduction to the Technique of Printing” (later called “Printing and Publishing”) at the Harvard Business School.  This led to Updike’s book Printing Types, Their History, Forms and Use (1922).  After Updike had written the text, Bianchi recommended it be illustrated.  While Updike used Merrymount resources, he also gathered images from Harvard College Library, Boston Athenaeum, Pierpoint Morgan Library in New York City and the Boston Public Library.  The scholarly book inspired further research in the history of the book and Updike received a gold medal from the American Institute of Graphic Arts.

Portrait of William Caslon, Mezzotint made by John Faber the Younger - Reproduction, original 1740.

The History of Little Billy & His Grand-pa is one of only a few miniature books printed by Merrymount Press.  It is 10 pages long and 3 by 4 inches big. It is the smallest run that Merrymount printed: 2 copies of first printing and the 11 copies of the second printing.  The book uses wood engravings by Thomas Bewick (1753-1828).

Memoirs of Mary Baker Eddy is the only book printed by Merrymount that was banned.  When the book was being published in 1927, using the font Mountjoye, it was suppressed by the First Church of Christ, Scientist.  The edition size was to be 5,000 copies, but the church gathered everything from electroplates to advertisements for the book and had them destroyed.

For Notes and Journal of Travel in Europe, 1804-1805 by Washington Irving. The title page and illustrations were designed and etched in aquatint by Ruzicka.

In 1930, Updike is quoted in a Boy Scouts Pamphlet for the badge in printing as not giving advice on printing but on how to live life, “...any young person on how to meet the problem of succeeding in life. Don’t bother about that; for what you do is not of much consequence.  It is the way you do it that counts.”

It was announced in The New England Printer that Merrymount Press was closing due to “increased operating costs”.  The last book printed with Bible for My Grandchildren (with color illustrations by Ruzicka) at John Bianchi’s residence 250 Bacon Street, Waltham, Massashusetts.

“The outlook for typography is as good as it ever was--and much the same.  Its future depends largely on the knowledge and taste of educated men. For a printer there are two camps, and only two, to be in: one, the camp of things as they are; the other, that of things as they should be.  The first camp is on a level and extensive plain, and many eminently respectable persons lead lives of comfort therein; the sport is, however, inferior! The other camp is more interesting. Though on an inconvenient hill, it commands a wide view of typography, and in it are the class that help on sound taste in printing, because they are willing to make sacrifices for it.  This group is small, accomplished little comparatively, but has the one saving grace of honest endeavour--it tries. Like Religion, ‘it will remain a voice crying in the wilderness; but it will believe what it cries, and there will be some to listen to it in the future, as there have been many in the past.’”

The Book of Common Prayer, the magnus opus of Merrymount Press, was started in 1928 and finished fall of 1930.  Merrymount was one of four printers asked to compete for the printing job. J. Pierpont Morgan financed the printing.

Updike’s printing was austere and without decoration.  He used rubrics (from Latin meaning “red” and originating with Medieval illuminations), to provide directions for how to conduct a service.  They were printed in red and roman type. The book is 656 pages long bound in crimson pigskin and blind embossed, printed on handmade paper. 500 copies were made.  A limited number of those copies were printed on vellum.

It was received as one of the finest examples of American book design, an instant classic when it was printed.

Trial Pages for the Standard Book of Common Prayer.

Unless otherwise noted these are gifts of Selma Ordewer, in memory of Daniel Berkeley Bianchi.  Selma has generously donated hundreds of items by and about Merrymount Press to the Fleet Library at RISD, Special Collections.

All items printed by Merrymount Press unless noted otherwise.